How about a 12-foot tall, wooden snowman jauntily shaking his blazing cane at you while smoking his pipe in defiance of the all-consuming fire. Insouciance you say? But of course, of course.

I will be cursed even more than you can possibly understand if you are going to do a damned thing about it. At least,     until,    I,    am,     good and ready to be consumed in a fiery paroxysm of my own self-determined immolation. The better to warm the cold Winter night of my choosing. So pay close heed to my desires if you wish to be warmed by the energetic exhalations of my willful self-destruction.

Exult in, and appreciate, my sacrifice! 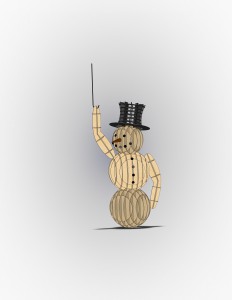 So, while hanging around Saratoga Springs for New Year’s, my friend SHardy casually mentioned that there might be a need for an effigy at Frostburn in West Virginia in February. I laughed, shook my head and said, are you fucking kidding me?! do you have any idea how busy I am? Well, damn that man, I could not sleep until I CADed up the initial idea for what would become the 20-sheet plywood wonder called Fire-osty. 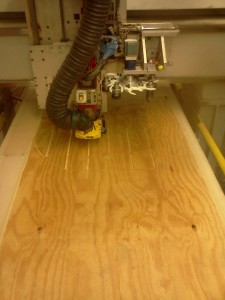 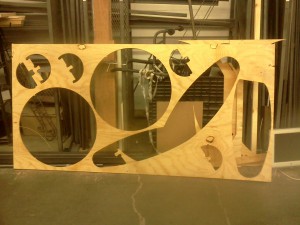 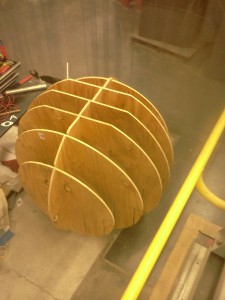 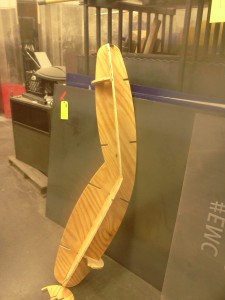 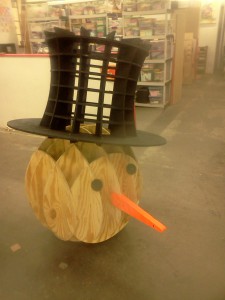 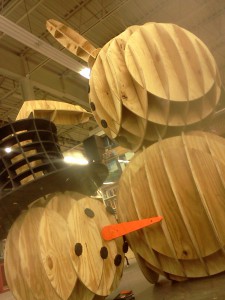 Once the design was, mostly, finalized, I generated the toolpaths for the CNC router using HSMWorks and proceeded to cut out the 20 sheets of 1/2-inch plywood that comprised the snowy beast. Some of that effort is chronicled in the images above. Luckily, we did a test build the night before we were intending to leave as the grooves turned out to be too narrow to accommodate all of the waviness of the plywood and it would have been kind of impossible to fix in the field. Not to mention it would have taken FOREVER! So using a vertical bandsaw where we could, and a circular saw where we could not, Dan S & I widened ALL of the grooves on the 42 components of the ‘snowballs’ that comprised Fire-osty’s body. We were able to leave the hat and the arms as complete units for shipping as we had the room and it made assembly all that much easier. Then we loaded him up, along with enough cold weather gear to outfit half a dozen people, and headed off to Pittsburgh, our staging point for the eventual assault on Frostburn.

Setting him up in the field only took a few hours, mostly thanks to all of the fine volunteers who came to watch and stayed to help. I was cold, windy and snowing, perfect weather for to build a soon to be flaming snowman. 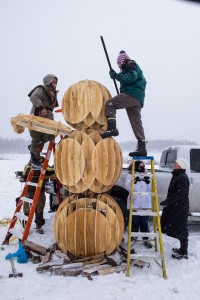 Dan and I Being Extra Safe 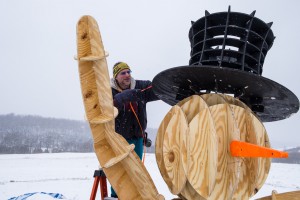 Phil Tying One On 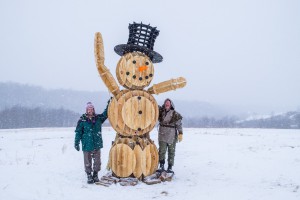 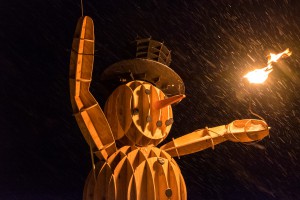 Secret Nightlife of the Plywood Snowman 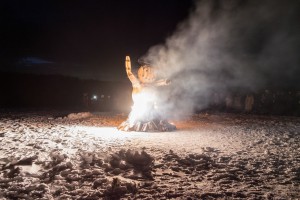 The vertical chambers in the body were designed as air passages to help with the burning, and as places to put in more fuel for the fire. To that end, the base was filled with 200-Lbs. of good West Virginia anthracite, 1/2 a cord of seasoned firewood, and before we lit it he was doused with 5-gallons of kerosene and ignited by three thermite charges. In the end, we decided against the gallon of white gas that we had on hand in case of emergency as that seemed like it might be a tad excessive…. 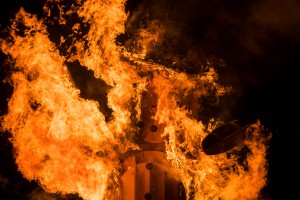 Give It Your Best Shot Mate! 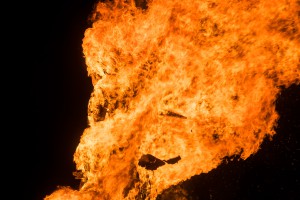 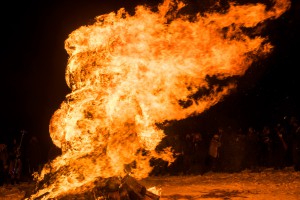 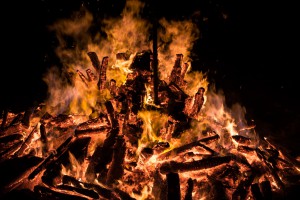 A couple of hundred folks stood out in the cold and snow and watched the fire-spinners, then Fire-osty himself go up in a whirling torrenty vortex of hot, gouty flames. As you can see, he burned extremely impressively. Hope that you liked it!

Thanks especially to Dan S & Phil S. and Kramer. Also, everyone at Frostburn who helped make it possible by helping to build, providing great places to be, warm food and good company. Especial thanks to Jesse T who runs this whole crazy event, The White Dragon Noodle Bar for providing us with an amazing living room, warm soup and good cheer. Also thank you to Frostburn for a grant that covered most of the expenses for this project. It was an honor and a pleasure to build your effigy this year.