Well, when you have a 30-foot tall diagrid dome and only one ladder to access the giant ring-shaped hammock 20-feet up in the air, the only logical thing to do is to add a slide to help folks get down. Right? RIGHT!

So, like all good ideas, this one sprang from a sort of serendipity. One fine day out on the Playa a friend called Cool Ranch came over to the camp with a 20-foot long section of drainage pipe and asked us if we would like a slide. Sure, why not? So, a crew led by Noah G dragged the pipe up the side of the dome, secured it to the frame, and added some padding on the landing zone. This lasted for all of about 30-minutes before there was enough collective pain that we realized that, yes indeed, this was a terrible idea. The slide came down and was returned to its owner. 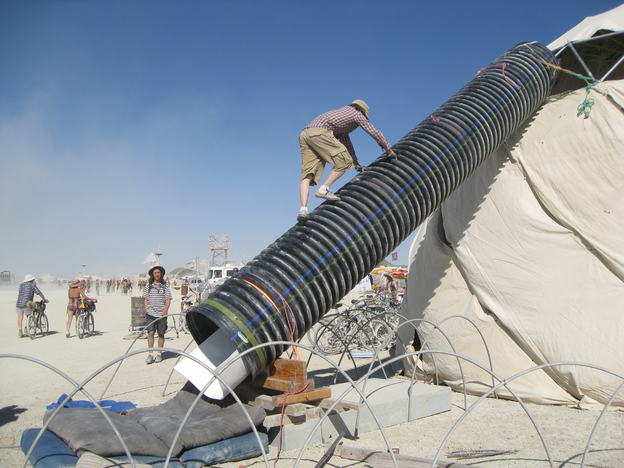 However, this caused a cascade of thinking of as to just how one could build a successful, and slightly safer, slide. Over the following Winter a design came into being and during the Spring and Summer it was caused to be built. 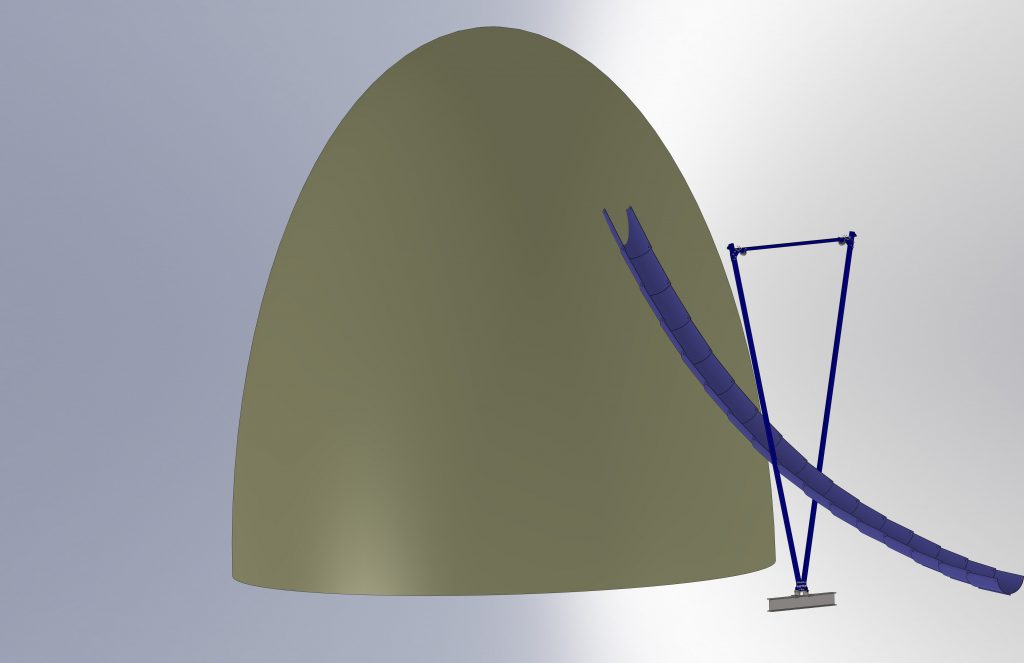 We ended up designing a triangular support tower that suspended the 42-foot long length of the slide by old climbing ropes that were knotted in such a way that we could, somewhat, easily adjust their lengths, and thereby, the curve of the slide chute itself. Some interesting challenges were overcome, such as just how to mill precise angles and accurately place holes in a 20-foot long rectangular steel tube that weighed approx. 120-Lbs. and just how to make a seat-belt mesh lattice to cradle the cut in half 55-gal. water barrels that comprised the chute. 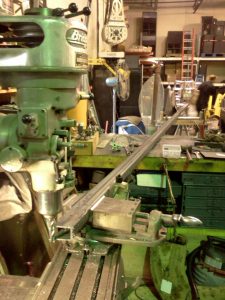 Mlling the ends of the 20-foot long supports. Image by D Ruuska 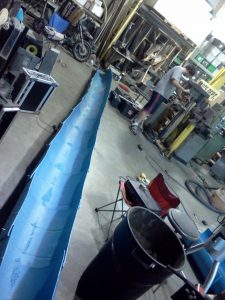 The 40-foot slide chute laid out in the shop. Image by D Ruuska

On-Playa set-up included digging a trench, staking the foundation I-beam support into the Playa and reburying it to give us a stable base. The triangular support tower was bolted together, suspension ropes were hung from it and then it was attached to the base pivot. The tower attached to the base with 2, 3/4″ dia. pins: the first one was used as the lifting pivot and the second, after raising the tower up vertically, was used to hold it in place. Finally we guyed it all out to some stakes, and tied the top off securely to the dome and the bottom to the decorated, wooden base that was staked into the Playa. With both ends of the chute thusly locked into place, the final task was to send brave souls down the damn thing and then adjust the ropes to get the optimal chute starting angle and overall curve. 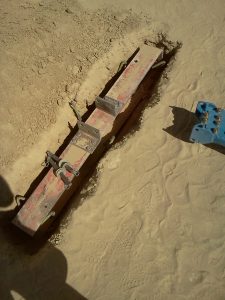 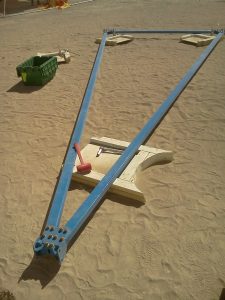 The triangular support tower assembled on the ground. Image by D Ruuska 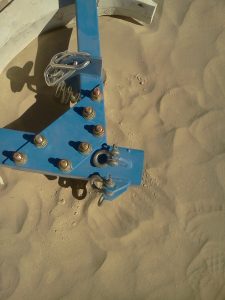 The first year we used ropes to stake out the tower. The second year we upgraded to long, blue, heavy-duty, ratchet straps and steel ‘V’s to distribute the staking load at the point of attachment to the Playa. 5/8″ long mild-steel stakes that were 36″ long were more than sufficient to keep it all in place. Here is the completed setup. It looked pretty damn cool and was VERY inviting to all sorts of people and was constantly in use. 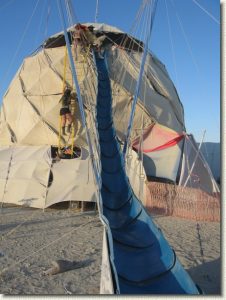 It’s a long way up!
Image by John M 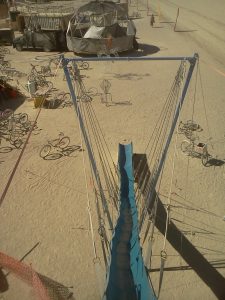 and a LOOONG way down…
Image by D Ruuska 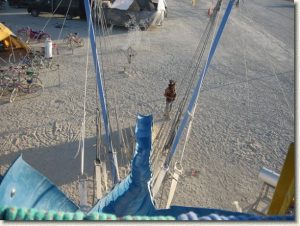 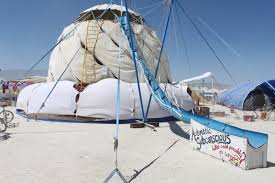 Slde at the ready, suspended and staked out.