So, here is a little something that was whipped up over a VERY compressed production timeline of a couple of weeks last January. I received a call about the possibility of making an 8-foot long jet engine out of paper for a companies Internet of Things presentation. Of course I said yes.

Of course, on projects like this it always seems that the final parameters are not set until mere days before the deadline, but I guess that is why I get paid the big bucks…    Anyways, from the concept image I was given, I made a CAD model in SolidWorks that incorporated a skeletal wooden frame, provision for hanging, and a spinning axis for the turbine blades. The leading and trailing edges of the nacelle provided an interesting problem as we were constrained to use rather heavy 200-pound card stock and the individual pieces needed to curve in two dimensions. This was solved by making up a two-piece positive-negative press mold out of plywood for the curves. The paper was soaked in water until pliable, then laid into the concave half of the mold, the convex half was pressed down upon it. The entire assembly was then placed in a microwave for a few minutes to steam the paper and dry it, thus holding onto its multiply curved shape. This had to be done 30 times. 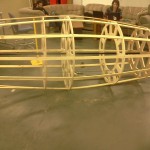 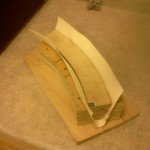 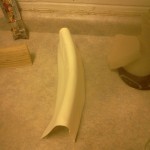 The frame was made up out of circular gussets cut out on the CNC router, then attached to each other with 1×2 pine ribs that had been planed down to 1/2″ thickness for flexibility. All in all, I rather liked the skeletal structure and intend to use a similar technique to make some larger, barrel-shaped structures in the future. 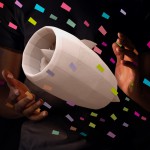 Concept view that we worked from. 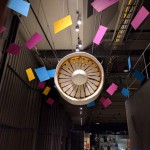 Installed view as you enter the space. 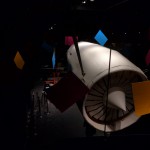 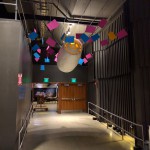 Attaching the paper to the frame was by use of copper upholstery tacks. Man oh man, was THAT a tedious process! Very surprising how long it took to cover the frame completely in a way that looked good.

As it happens, the venue where this was to be hung, the W Hotel in Boston, did not have any rigging points available in the area where it was intended to be hung. So, I had to design, fabricate and install structures to hang it from to boot.  They can be seen as the horizontal bars above the jet in the installed images. These had to cantilever 11-feet out from the edge of the mezzanine. More fun! The hotel was so impressed with them that they asked to keep them after we were done with them. Worthy praise that.

Three days before the event was to take place, they decided that they needed a life-size paper washing machine as well. So, I designed and made that as shown in the last two images. Not much sleep that week I tell you. 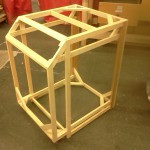 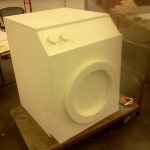 In the end, we hung it up at an angle of about 15-degrees so that, upon entering the space, it looked as if the jet was coming right at you. All around it were hung colored, paper trapezoids intended to represent the data-stream of information coming from all of the sensors in the jet. All in all, everyone was impressed and it was really a hit and I thought it looked great. Always a nice feeling to finish a grueling project and have it end in a positive manner.

Thanks to XXIII, Sewer, Ecco, Matt-Man, Spencaaaah, Kerri & Pat for working on this with me and helping to get it all done on time. You guys ROCK!